Powerlifting is the ultimate test of human strength and there is an inbuilt desire of man and women to be strong. We can go back to the days of the Roman gladiators and ancient Greek games where we find that feats of strength were a very popular part of these gatherings and the winners were treated with great respect. Today Powerlifting is an International sport in which over 120 countries on all continents participate and is the fastest growing strength sport in the world today.  Mental strength, physical power and tactics across 3 lifting disciplines make it captivating to watch and exciting to participate in.

Powerlifting is a combination of 3 disciplines. 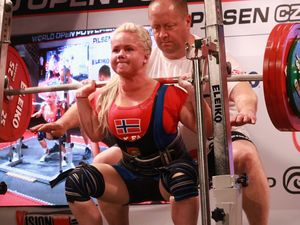 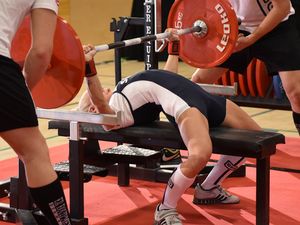 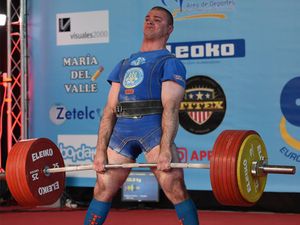 Lifters have 3 opportunities to lift as heavy a weight as possible in the 3 different lifts and the highest combined total wins the overall title.

Good/Bad lifts are determined by a number of rules and are judged by 3 referees who indicate with a white or red light accordingly - a majority decision decides.
Contentious decisions are referred to a jury panel who have the power to overrule.

The Squat
The lift starts with the lifter standing erect with the bar and weights resting across the lifter shoulder. At the referee command the lift will begins, the lifter bends his or her knee’s and lower himself into a squatting position, the position is reached when the top surface of the legs at the hip joint is lower than the top of the knees. The lifter then returns to an erect position with knee’s locked. At the referee command the bar is returned to the rack and the lift is completed.

The Bench Press
With his or her back resting on the bench, the lifter takes the loaded bar at arm’s length. At the referee’s command the lifter lower the bar to the chest. On the chest there must be a visible pause the referee will then give the command to press, and then lifter pushes the weight up until the arms are straight and the elbows are locked. Then the referee will call ‘Rack’ and the lift is completed as the weight is returned to the rack.

The Deadlift
In the Deadlift the lifter grasps the loaded bar which is resting on the platform, the lifter pulls the weight from the floor and assumes an erect position the knee’s must be locked and the shoulders back, with the weight held in the lifter grip. At the referee command the bar will be returned to the floor under the control of the lifter.

Q: Are Powerlifters not just big fat men?
A: Quite the contrary. A large proportion of participants in Powerlifting are women and Juniors of all shapes and sizes. In competition the sport is split in to weight classes ranging from 47kg to +84kg for women and from 52kg to +120kg for men.
Powerlifting is widely regarded as the perfect way to tone muscles and to achieve a very healthy toned physique and is often used as the foundation of most strength and speed sports.

Q: Is Powerlifting full of drug taking and doping?
A: The IPF (governing body) has a banned substance abuse policy and adheres to the World Anti-Doping Code. Through years of endeavour, continual education and in & out of competition testing IPF Powerlifting has become one of the world’s cleanest sports.
Doping is completely outlawed in the EPF and IPF and so in-competition and regular out-of-competition testing is routine.
At the World Games in 2017, 57 Powerlifters were given doping tests. There were ZERO positives!

Q: Isn’t Powerlifting just a young persons sport?
A: In competitive Powerlifting there are several age classes. Sub Junior (from 14 years old) up to Masters 4 (from 70 years old upwards) A very large proportion of powerlifters start the sport at retirement and there are many who still lift even into their 80’s. The health and social benefits are considerable.

Q: Who is watching the sport?
A: The EPF currently live streams two of its major championships annually on YouTube.
Over the past 3 years viewing figures have increased by a staggering 429%. Sessions are also archived there for future viewing.

Q: What sort of people participate in Powerlifting?
A: The inclusivity of all body shapes, sizes and ages within the sport is something that few other sports can boast. Able bodied and disabled lifters also often compete alongside eachother too.

There are over 100,000 registered EPF members in Europe

The heaviest weight lifted by a male powerlifter is 505kg. The men's total combined World Record is 1272.5kg.

The heaviest weight lifted by a female powerlifter is 318kg. The women's total combined World Record is 783kg.