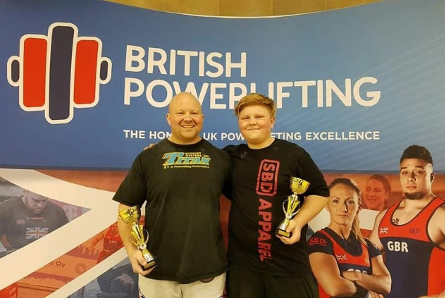 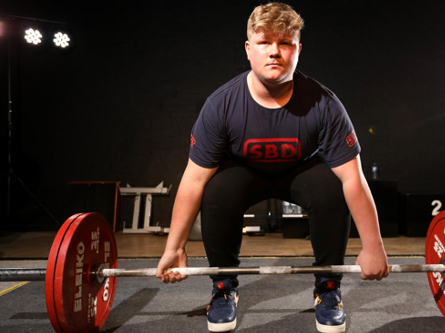 The sleepy suburb of Bridgemary, near Gosport in Hampshire, England, has been concealing a secret weapon, a powerful double helping of sporting excellence.  Father and son, Dean and Ray Bowring, have both achieved world honours in powerlifting.

Father Dean, 46, still lifting and now head coach for the British team, doesn’t compete as much as he used to, although he still harbours an ambition to win the Masters world title.   During a glittering career he achieved a long list of triumphs in the international powerlifting arena, winning no less than 22 British Open honours.  The pinnacle of Dean´s career was being crowned World Open Champion in New Delhi, in 2009.

And as if this were not enough for one family, son Ray is now well and truly on his way to achieve the same notoriety as his famous dad.   Ray has a different goal though.  He wants to win the World Powerlifting championship and the World Classic championship.  He calls it ‘winning the double’.   And he´s well set to do just that.

Ray got the thirst for powerlifting from Dean, who is his coach – and they train together at the Fitness24 Gym in Gosport.  ‘Ray used to come to the gym with me when he was very young but never really showed an interest in competing until he was about 12.  But he always liked to lift heavy stuff and loved helping at competitions from about 8 years old’ says Dean  ‘He did his first competition when he was 13.  He just asked can I lift in this competition?  It was a local competition and some lifters hadn’t turned up. Although he had lifted some weights before he had never practiced powerlifting, he´d just watched.  He went 9 for 9.  After that he started training for powerlifting, once or twice a week.’  And the rest is swiftly becoming history.

Ray currently holds the under-18 World title - setting a new world record 370kg squat lift at that age category.  And in August, the younger Bowring is setting out on his next step in the sport after becoming the first young person in the world to be offered a new scholarship at Midland University in Nebraska.

This new move will take Ray away from his training partner.  ‘Ray is really looking forward to going to study, train and compete in the USA.  I will miss him not just because he´s my son but because we’ve been training partners for a while now.  Since I was young, powerlifting has changed so much around the world and it´s given Ray an opportunity that could be life-changing.  He can make a career out of it in today´s world.  I put my whole life into powerlifting and I think it has held other parts of my life back but I have no regrets.  I love powerlifting, it’s the greatest sport in the world.’