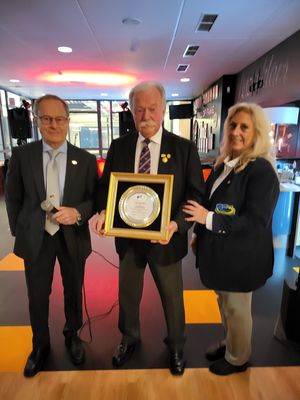 Johnny Wilklund has been ‘in the family’ as he puts it, for 50 years and although now retired from lifting he´s still involved in the sport and a familiar face, and voice, as a speaker.

An accomplished lifter in the -75 kg class, he stopped lifting in 1980 due to an injury, becoming a Cat 2 referee a year later and a Cat 1 referee in 1993.  He was also team coach for the Swedish powerlifting team for many years throughout the 1990´s.   From there he became President of the Swedish federation, and he speaks proudly of the fact that the first classic world cup in 2012 was arranged in Stockholm and Sweden was the first nation to introduce live streaming in 2019.  Johnny also served on the IPF Technical Committee between 2003 and 2019.

‘I do believe that I knew the rule book from the first word to the last word when I was a referee.  The rules have changed a little bit but not too much.  I worked with John Stevensen when he was chairman of the Technical Committee in 2003 and we sat down for a couple of nights and went through the rule book, changing a little bit here and there to make it easier for referees.  Nowadays, there are a couple of things, that I might change.  For example, in the deadlift, when a lifter is losing balance, sinking the bar a little bit, in my opinion that should be allowed if it happens by accident, because if you are losing balance in the front and taking it back that is not an advantage, it’s much heavier to stop and take it back again and the audience like to see a good fight.  But apart from that, I think the rules are rather good as they are today.’

Johnny prefers the classic powerlifting of his era.  ‘Yes, absolutely.   We didn’t have the kind of equipment that they have today, there was nothing to compare with what they have today.  It was much easier then.  We are talking about strength, using your body in the right way.’  But the basic principals are the same for both and Johnny´s advice to anyone starting out in lifting is ‘Take care of your body.  If you are not sure about the kind of supplements you get in the protein that you are buying, stop it.  Don’t take it.  In my day it was just testosterone and anabolic steroids but it’s much more complicated these days.  Be careful.  Enjoy your sport and take care of yourself and your body.’

Johnny lives alone in a small town near Stockholm.  To relax, he reads a lot.  He enjoys walking and training in the gym ‘I’m still training, just as a hobby and to keep the body in good shape.  It’s very important because when you grow older you still need to take care of the body.  And it makes you feel healthier.  I walk, I cycle, I do whatever I want.’  In 2019 Johnny stepped down from his duties on the IPF Technical Committee to pursue his dream of a worldwide trip.  Sadly, Covid put an end to his plans, but Johnny has been able to do some speaking since restrictions were eased.  Which is great for Johnny, because, in his own words, ‘I enjoy the speaking most of all’.